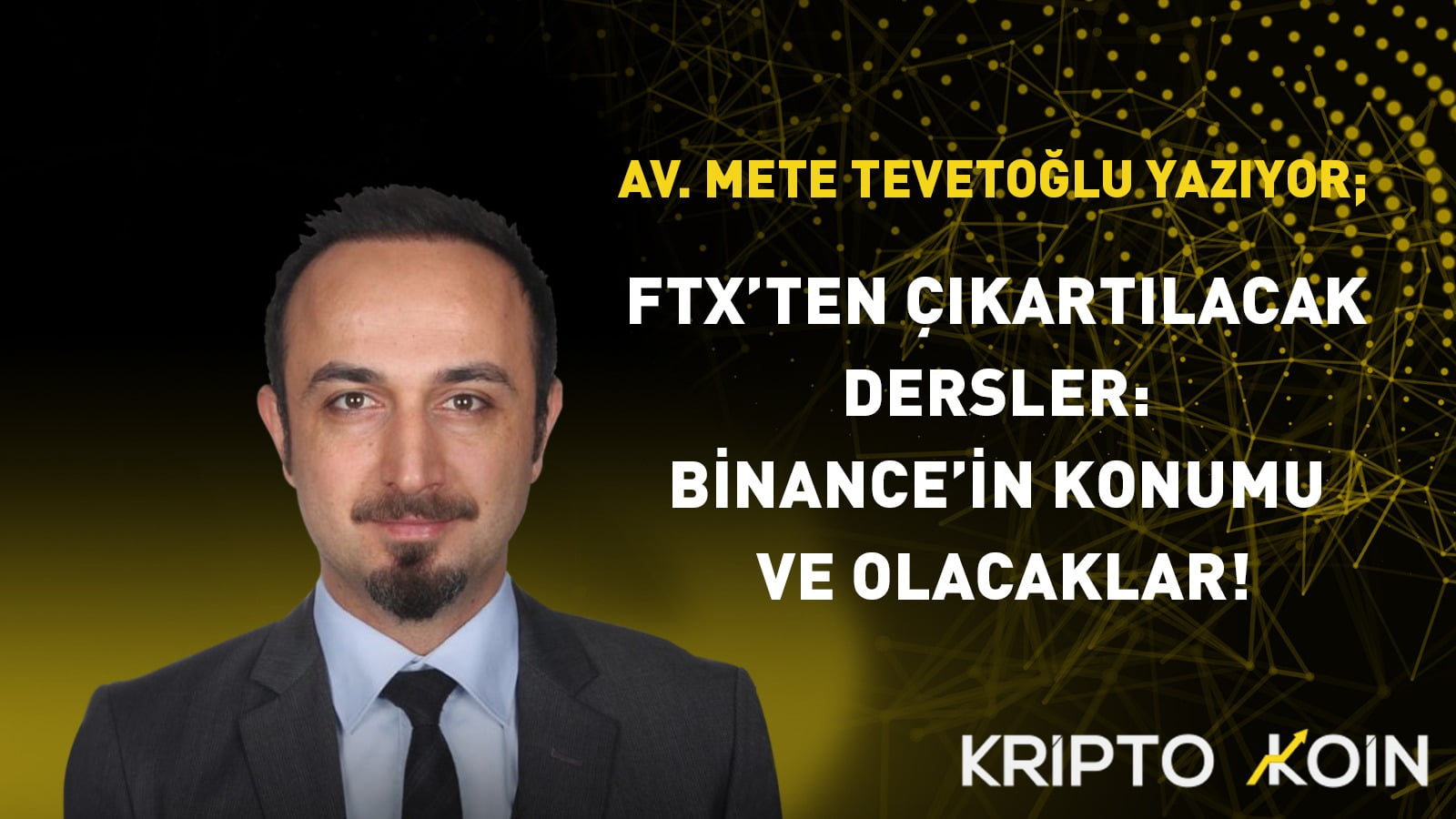 What happened on the FTX crypto platform this week has been much discussed. The debate is still hot and ongoing. There are many lessons to be learned from this incident.

The positions and disclosures of both FTX and Binance have now triggered many existing and future mechanisms that are not fully visible. So what actually happened and what awaits us?

This process started with the shaking of the FTX platform, which was shown in the midst of the biggest on a global scale. The situation that put FTX in a difficult situation was the difficulty it experienced in providing liquidity. In other words, FTX began to be unable to make cash payments to its customers. What triggers this is called sudden and rapid cash out processes by customers. In the last three or four days, a withdrawal process of 3 billion dollars according to some sources and 10 billion dollars according to some sources is cited as the reason for this situation. The FTX process directly and deeply affected the entire crypto market, especially Bitcoin.

The factor that revealed the sudden and high demand for cash outflow from FTX is the reinforcement news given to the balance sheet of Alameda, one of FTX’s subsidiaries. Of course, the valuable detail is that this foundation is made with FTX’s own token, FTT. The fact that the company’s balance sheet consists of its own tokens of weighing assets has raised questions. However, other valued or fixed-value crypto assets were expected to be on the balance sheet. Again, it was expected that FTX would show fixed-value crypto assets or dollars or euros, not FTT, that is, its own token, in return for its processes and debts to its affiliates. As it is known, the possibility of producing its own token as much as it wants and offering collateral is a factor that undermines the reliability of this collateral. Moreover, it was not clear at the beginning to whom these FTT tokens belonged, more precisely, whether they were related to FTX or its customers.

Later, with the statements of Binance CEO, when the arguments that FTX was providing customer assets as collateral started to flare up, the issue smoothly progressed to a more troublesome point for FTX. Binance’s announcement to sell their FTTs led to the sale of all FTT holders, resulting in a dramatic decrease in the value of FTTs and FTT collateral. FTX and FTT faced an irreparable costly loss. It turns out that just a few days ago, FTX’s place and future in the crypto market had another direction.

At this point, Binance CEO made another statement and shared that FTX asked them for help, an appropriate letter of intent was signed in the middle, and that they were considering purchasing FTX after the DD process. Although this looked like a rescue plan, it was not a definite plan. However, many press sources made this statement in the form of Binance is buying FTX. It turned out that it was too early to talk about a real purchasing process. Moreover, even the signed letter of intent was not binding and this point was clearly emphasized in the statement.

It is hesitant at this point that FTX also makes similar statements with Binance about the purchase. These early statements were followed by closing processes in FTX. For this reason, not many people wanted to see the possibility of me buying, that is, not helping, while imagining the upside movements of a possible purchase. All the while, the entire market fluctuated from end to end. COMEX from the USA examined both sides and what happened. The attention of many regulators has focused on these events. Just after that, Binance made another statement that means that it has stopped buying FTX according to the DD result. For a company and structure of this scale, the world’s fastest DD could have been built. Of course, this is not possible in our opinion. But unless a DD process started long before these events.

At the end of the day, the impression that the problem has become even more intractable, let alone being solved, is in the foreground. On the other hand, the entire market has not been able to recover from the effects of these events.

The first of these is the regulation of the storage form and custody authorizations of crypto assets and customer assets. This bet has been on the agenda for quite some time and is highly controversial. After this incident, it became very difficult for the platforms to keep the custody authority.

Second, the use of client funds and crypto assets as collateral in third-party processes, such as risky processes and flaws, has led to bitter experiences, rules written in blood years ago in the capital markets. Finally, due to this latter situation, it can be foreseen that the possible regulations will be quite harsh for crypto asset service providers (CSPs) and that they will be put into steel corsets to discipline them. In terms of Binance disclosures, the bet is more complex. Because the first sales and then the last withdrawal statements did not have a positive effect on the market.

Moreover, the crypto market, which has been away from the radar of the competition authorities for a while, has strengthened its candidacy to be the subject of the investigation and implementation of the competition law and authorities, just like in the digital markets, with the influence of these events. An investigation into a possible breach of competition law, anti-competitive action, process or abuse of dominance may trigger authorities in other countries in the same direction. We are not sure that the deep waters of competition law will refresh the crypto market. Examples of possible effects of this are investigations and penalties in digital markets. Thus, behind and beyond the visible face of the FTX event, the possibility of direct reflection of the historical and experiential elements of capital market law on crypto regulations was triggered, and the possibility of discovering a new playground that would attract the attention of competition authorities that looked at this field from a relatively distant place was strengthened.

Alex Gloria
Previous articleAttention: These Altcoins Trade Premium on FTX!
Next articleToday is the Big Day for These 11 Altcoins: Here’s What They’ll Be!